A friend reminded me that every day should be a day of giving thanks. Here is how that lesson came to me.

Thanksgiving for my husband, as a boy, meant large family gatherings with grandparents, aunts, uncles and cousins…adults and children celebrating, visiting, running around the private dining room of a nice hotel or restaurant. Later when the families moved further apart, it meant smaller gatherings where mothers and grandmothers cooked for days and the meal lasted an hour.

My family, in contrast, had migrated from the Midwest…a father, a mother, a son and a daughter. Thanksgiving day began with the selection and killing of an old laying hen past her prime. She was boiled until time to add vegetables and dumplings. When the meal was cooked, everyone sat down to a prayer of thanksgiving over chicken and dumplings and pumpkin pie.

In the first year of marriage, my husband and I also migrated away from family. We retained our separate expectations of what Thanksgiving would look like, smell like, taste like and above all, feel like, but somehow never talked about them. So, sitting down to chicken and dumplings shocked one of us. And it wasn’t because I short-cutted the whole chasing, chopping, plucking, singeing, butchering part…and bought the chicken at the store.

Over the years, my husband has continued to hope for a more elaborate celebration while I lean toward simple. His hope is for a feast with turkey, dressing, mashed potatoes, yams, green beans, cranberry relish, a couple kinds of pie and lots of people. Mine is a less complicated vision. Thanksgiving continued to provide ample opportunity for disappointment as our teenage children grew into that “eat and escape” stage. We tried inviting friends to our home for celebrations and I was cranky from all the days of preparation and clean up. We tried potluck Thanksgivings. We tried serving the Thanksgiving meal at the Rescue Mission as a family. One memorable year our son had been grounded for some infraction. He volunteered to cook the meal in trade for the grounding and we agreed. He was the most thankful for this Thanksgiving, as he finished cooking and left the house to join his friends.

Nothing seemed really satisfactory until two years ago. Our son and daughter were grown and living too far away to join us. I packed turkey and ham sandwiches, cranberry sauce, potato salad, pumpkin pie and Champagne into the picnic basket. We drove deep into the Owyhee desert, a place of solitude we both love and are thankful to have so close at hand. We enjoyed spotting hawks, pronghorn antelope, jackrabbits and watched for bighorn sheep. At noon we set up our feast. As we popped the cork and toasted the simple beauty that surrounded us, something shifted. In this grand and stark setting, we finally made the holiday ours.

with thanks to Judy Ware:-) 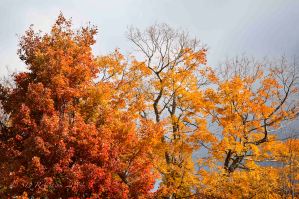 etimes the stars align and offer up opportunity. My son called from London and asked if I wanted to meet him in New York; to take a road trip through New England while he waited for his emigration papers to be processed. Neither of us had been to that part of the United States and it was to be in October at the height of “leaf peeping” season. 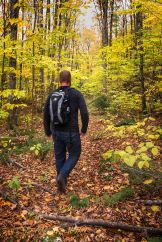 Such opportunities are rare…a chance to spend time with a grown son who lives an ocean away. A chance to reconnect as adults and to cement relationships with new adventures. Of course, I said “yes”.

After meeting, we were on our way up the beautiful Hudson Valley. First surprise…the Hudson is big. Not a blue line on a pull-down classroom map. That was to be followed by many other surprises. Our knowledge of the history of New England was of the “fill in the blank” variety gleaned from dim memory of school lessons. The names leaped from forgotten pages: Roosevelt, Ticonderoga, Mohawk, Abenaki, Fort Henry, The Green Mountain Boys, Breton Woods, Carnegie, W. E. B. Du Bois, Frost, Thoreau.

The concept of wilderness and the beautiful waterways were everywhere. They mingled with flocks of wild turkeys and fields of pumpkins…descendants of that first Thanksgiving.

The trees rolled golden, russet and lime green over the Berkshires, the Adirondacks and the Green Mountains. The forests were thick, filled with brush, and tumbling streams. We began to piece together what a daunting sight this would have been to the first settlers. Land to be cleared and cultivated, but at backbreaking price.

Through little towns spread out all over with the same name, only differentiated by the words North, South, East, West and Center tacked on the front. We never quite knew when we had arrived. We puzzled over car dealerships in the middle of the woods, real estate offices far from any other business, tanning salons in the middle of “nowhere”?

Some things are familiar. The false front building would be at home in the west. And some things are different. I’m enchanted with the covered bridges. The order of towns built around a town hall and church. The Barn Stars and gazebos remain a charming mystery. And we admired Vermont’s sign laws…businesses advertised on small road signs; no western-style billboard. We laughed at business names, especially the beauty salons…Curl Up and Dye, Combing Attractions, Hair Force One.

Big houses, bigger barns and the biggest silos I’ve ever seen. We guessed they held all that it required to feed a herd over long, snowy winters.

And we ate well, starting with a feast at the Culinary Institute of America, alma mater to two of our family. Daily there was a choice of local sausages, cheeses and brews. New flavors in new environs. Amazing bakeries…coffee and conversation while mastering a crossword puzzle.

On toward the White Mountains, we stayed close to the land, choosing to picnic in the blueberries and hike the Long Trail where we could. Early morning treks rewarded us with shifting fog and mist rising over farm ponds and turning forests.

We crossed the Appalachian Trail, wound through Smuggler’s Notch, climbed Mount Horrid, hiked through The Flume in Franconia Notch and admired New Hampshire granite. Slabs of it in the mountains and piles of it stacked and finished in town halls and churches. For seven days and 1700 miles there were new adventures, long conversations, memories shared. 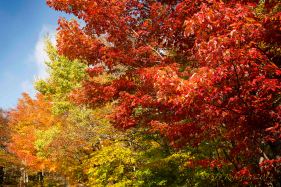 On our last evening together, we kiss and walk away and the sudden silence consumes me. I want to run back and get into the car…to continue down this road, knowing that this kind of road trip with my son may never come my way again. 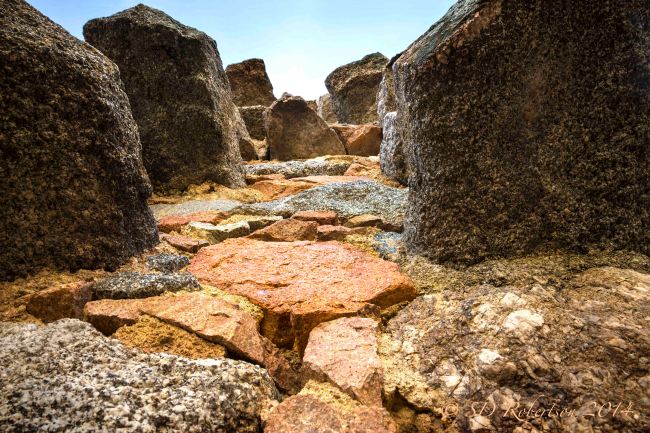 Knowing the only way

Of rocks is down

Down through the hourglass

By winds and waters

To grains of sand

the chop of water,

its lap and lisp on gondola prows,

and the slap of waves eroding

the sound of tools

the caress of a cello’s chord

soaring through a basilica. 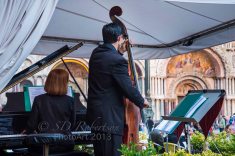 the contrapunt of vegetable vendors,

drifting down canals after dark.

where the smell of cappuccino

slips out of doorways,

lingers over oregano and cardamom,

mingles with must on saltwater. 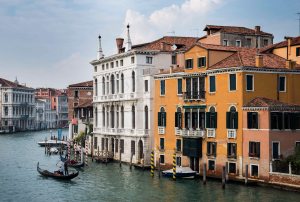 light caught at an angle

in all the fragility of stained glass.

the color of pigment

masters who painted the saturation

of jade water channels, the filigree of crosses,

the shadow of wrought iron,

and the many faces of Madonna and Child.

the jewels applied by the makers of masques.

and the mystery behind the masque.

The layers read like pages in earth’s book of time.

This is a harsh and hard land.  Man clings and then passes.  The evidence is all around as we make our way past signs of early settlement.

As we bump over the flat sagelands, we spot mule deer.  Larks and bluebirds are out and the ground squirrels are bouncing in and out of their holes.  Three pronghorn race the car…just for the thrill of it.  Well, we were certainly thrilled as we were forced to slam on the brakes when they crossed in front of us.

Our destination is Jordan Craters lava beds, a barren moonscape island in a sea of sage in a remote part of Oregon. We begin our exploration at Coffeepot Crater.  Peering over the edge, one can imagine the lava pushing up 150,000 years ago.

We set out over the lava fields trying to remember our geology, delighting in the ropy pahoehoe lava, the tubes, gutters, ridges and vents.  Its bleakness reminds us of what primitive earth looked like.  The only life on the lava is lichens and the occasional lizard.  And yet, there is beauty in the starkness.  Life and earth reduced to simplicity.  One can almost grasp it.

I have lived where there are ground-shuddering electrical storms.  Places where winds howl, stripping shingles off in sheets; where rain slashes and lightening explodes followed by slam-to-your-knees thunder.

I wonder if this is what it was like in the moments before a bolt hit Hiram E. Leslie in Dugout Gulch.  Leslie was working cattle in a storm when he was killed by lightening. After his death in 1882, the area was renamed Leslie Gulch.

Leslie couldn’t have a more beautiful monument.  His name evokes a land of eroded volcanic ash, a canyon complex of hoodoos, honeycombed towers and arches.

All of this was hunting and fishing grounds for Native Americans 5000 year before Leslie came. 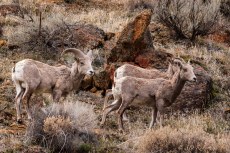 I follow the gravel road that was once the mail route between Rockville and Watson, Oregon and watch the canyon walls for bighorn sheep.  The side canyons beg to be explored and I stop several times before the road ends at the Owyhee River.

The sun drops and clouds gather.  There won’t be lightening this time, but it is winter and the threat of snow urges me homeward. 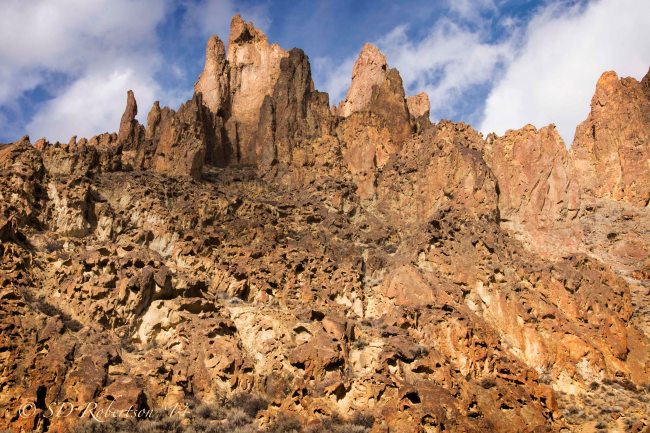 In between snow storms 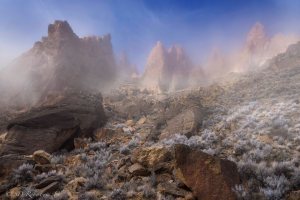 Put on gauzy sheets of fog

And pretend at “ghost”